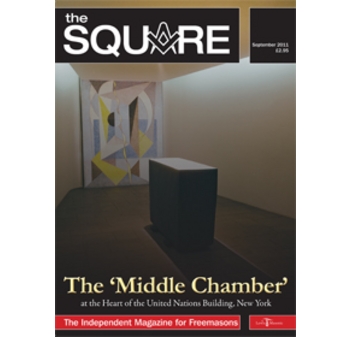 The Square - The Independent Magazine for Freemasons

It's what all Masons are talking about. The Square magazine now has a new look and is in a larger format, bringing you more interesting and thought provoking articles, from an independent point of view. Plus, a chance for you to contribute and see your lodge highlighted, plenty of special features, a humorous look at masonic life and even a strip cartoon and a caption competition, where YOU can win a prize!

THE SQUARE IS PUBLISHED EVERY FOUR MONTHS

The 'Middle Chamber' at the Heart of the United Nations Building, New York
Tony Barstow - How can Dag Hammarskjold, a non- Freemason, who died exactly fifty years ago, offer any elucidation of something as quintessentially Masonic as the Second Degree Tracing Board?

One of my other interests is...
Charles Grace - Providing day outings and holidays on waterways for disabled and seriously-ill people of all ages is just one of the other interests of one of our most senior masons

The Family of Masonry in the United States
Alison Gardner, Martin Cherry - A major new exhibition at the Library and Museum of Freemasonry explores the role of Freemasonry in American society from its eighteenth century origins to the present day.

Dr Wilhelm Begemann vs. the English Masonic History Establishment: A Love-Hate Story
Alain Bernheim - Why, despite being an eminent and prolific masonic author did Dr Wilhelm Begemann never become a member of, Quatuor Coronati, the premier lodge of research

Enjoy the Drama and Colour of the Royal Arch
Keith Tallon - The Second Grand Principal, George Pipon Francis, addresses the annual dinner of the Aldersgate Chapter of Improvement

One for the Ladies:
How to survive Ladies' Night
Philippa Faulks - Help is at hand for the 'Lady' on her Ladies' Night

Royal Arch - far from ephemeral!
Yasha Beresiner - Whilst Royal Arch ephemera is plentiful, on this occasion Yasha takes the opportunity to clarify the place of Royal Arch Masonry in England

The Square Debate
The previous two debates - should membership of certain Masonic Orders be restricted to those professing the Christian Trinitarian Faith; and that of the Craft to a belief in a Supreme Being have generated a substantial postbag

Letters to the Editor

Square Humour and Cannon's Corner
The funny side of Freemasonry

What is it?
An answer and another masonic item to identify