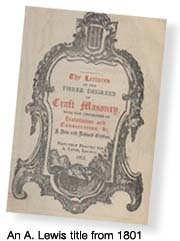 Lewis Masonic is a long established firm, founded in 1801, specializing in the publication of Masonic texts. Then called A Lewis, the focus of the company was exclusively on ritual books from Masonic Craft degrees through to the Masonic side orders.

Over the years the name changed from 'A Lewis' to 'Lewis Masonic'. Nowadays, ritual books are still kept a priority at Lewis Masonic but the company's focus has expanded to cover all areas of Masonic publishing.

What is a Lewis

Lewis Masonic was named after the Masonic Symbol of a Lewis. A Lewis is 'a three-pronged iron cramp that is inserted in a prepared cavity in stone by which it may be lowered and lifted with precision'. The name comes from the Latin word Leuis, meaning to levitate or lift.

In speculative Freemasonry a Lewis can be found in every lodge on the Senior Warden's pedestal, attached to a Perfect Ashlar - a finished stone - that in turn is suspended from a tripod or derrick. 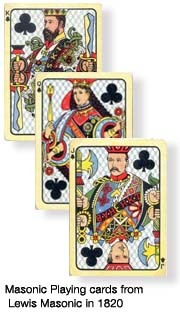 In Freemasonry a Lewis represents strength. The grip of the Lewis that lifts the stone is likened to the grip given to raise the candidate in the third degree. This, to many Freemasons, represents one's own ability to improve oneself and rise above one's vices and faults. A Lewis has also come to be the term used to describe the son of a Freemason. The reason for this is quite simple as is explained in the explanation of the first degree tracing board. A son of a Mason's duty is to support his parents in the same way a Lewis supports and lifts a rock.

The Aim of Lewis Masonic

Lewis Masonic, as its name suggests, was founded with the aim of supporting Freemasons and Freemasonry, its aim being like the Lewis to give every Freemason the tools to better himself and to help him to make his daily advancement in Masonic knowledge.