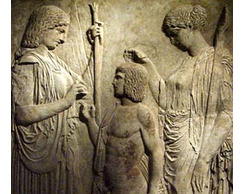 While chatting with publisher Martin Faulks of Lewis Masonic a few weeks ago, I was speculating about the manner in which modern initiation, by and large, does not seem to measure up to the descriptions and effects of initiations from the ancient and classical world. Now it’s certainly possible that this could simply be viewing the past through rose-colored glasses and imagining a prior golden age. But it’s also possible that there is some merit in the notion that initiations in the distant past did have components and consequences that were different than today. If we accept that ancient initiations were more efficacious as an axiom, it provides very fertile ground to explore the meaning of initiation and discover what ingredients could improve, or actually facilitate the initiatory process for modern initiates.

Historian Walter Burkert, in his essential tome Greek Religion, when describing the evidence of ancient initiations stated that, “The very fact that the reactions described … are not uniform but vary between perplexity and exaltation indicates that this is … a … sympatheia of souls and rituals, some form of resonance which does not come in every case but which, once it is there, will deeply move or even shatter the constructs of reality.” (p. 114) Now it is important to acknowledge two things about this statement: first is that not every initiate had this sort of ultimate initiatory experience and second is that some did have a reality moving or shattering experience, and this would be quite unlike the experience of modern initiates, generally speaking. A reality shattering initiation should be interpreted as an experience that prevents the initiate from continuing to live in the manner that they once did and having to turn their attention and activities to the service of the divine. If we can acknowledge and accept this as fact, we can assume that there is are specific acts, ingredients, and attitudes engaged in ancient initiatory ceremonies that we have neglected and may be key factors for producing the sort of reality shattering experience described by Burkert.

I want to be clear. I do know that initiations conducted by modern Masonic lodges and appendant bodies, as well as those offered through various esoteric fraternities, orders, and societies do, in fact, produce experiences that are often revelatory. These cause elation, a feeling of connection, joy, and may awaken a longing to understand the mystery that is life. But all too often, that revelation is not transformative because the imparting of information and knowledge does not equal transformation, and often leaves the initiate desiring to understand more, yet without the supports that would facilitate a change in the state of one’s being. I intend to explore what I see as the reasons for initiations not having the effect of a change in one’s state of being. And there are several.

From my investigation into the mystery cult of Samothrace, detailed in The Art and Science of Initiation, it is evident that there was a combination of place and myth that formed the foundation for the initiatory rites. So, the location of the sanctuary, or temple, was the same location where the mythology (from which the ritual was derived) was set, where the story took place. Being in the very same place that the gods enacted their mytho-poetic adventures and going through an initiatory rite derived from that very mythology inevitably had a profound impact on those who took part. We also know that the very names of the deities of Samothrace were known only to the initiates and there is also evidence that these names were likely magical formulae that enabled those who knew and pronounced their names to achieve specific results. Aside from not being able to hold the rites in the place of the myth, modern initiations do try to recreate the myth through ritual reenactment and also utilize names and words of power that are superficially unintelligible.

But there is another crucial factor that modern initiatory groups in the West often lack, which is the initiator being a realizer—one who has attained stable gnosis, one who has gone beyond mind and made real the understanding of divine expression to the point that they can transmit it to their students and disciples. There is a sympathetic resonance that is the essence of initiation where the initiator can communicate the nature of reality to the candidate. This is similar to the way in which tuning forks work. If you have two tuning forks pitched to middle C and you strike one, then bring it closer to the other, the one not struck will begin to vibrate and make sound. The initiatory process is the same. It is introducing a resonance into the body mind of the candidate that has the potential to transform the candidate into the same thing that the initiator already is. This is a huge missing link in the chain of modern initiations in many esoteric schools and the implication is that modern initiations that don’t feature a realized initiator may tend towards being counter-initiatory.

Another crucial factor that is not often considered in understanding the differences between initiations in the past versus those conducted in modern times is the attitude of the participants. I believe this is actually the single most significant problem with regard to initiations not effecting transformative changes. If one is convinced that the deities are real, that the initiators are true conduits for the divine, and that the rite has the power to transmit the seed of transformation, this would allow for the ceremony to have a much greater impact. But all too often nowadays, there is uncertainty about the deity (or outright disbelief in their very existence) and the initiators are not capable of realizing the divine nature of reality and therefore unable to transmit the seeds of transformation. In these circumstances, it is easier to understand how the attitudes of everyone involved would be more casual and profane and less reverent and profound. If participants had the proper attitude, the initiatory rite would take on a sacredness that would only enhance every beneficial aspect for all involved. Unfortunately, the modern materialistic and nihilistic mindset is anathema to the sacred and that must be reconciled in order to make the initiatory process more effective and what it is intended to be. When I use the term materialistic nihilism, what I’m referring to is acting as if what we can perceive and experience with our senses and consciousness is all that exists. Now many of us may profess beliefs in phenomena that cannot be perceived, but we rarely act is if that is the case. In my opinion, if we did truly enact the beliefs we profess, our lives would be more centered around the Great Architect’s trestle board, or at least working to determine what we must do to serve those plans better. And I include myself in that assessment.

Even if an initiatory rite has every other aspect listed in this essay (including a living enlightened master), if the candidate’s attitude is one of materialistic nihilism (which is that promoted by our culture today), then the initiation will likely be less than transformative. This materialistic nihilism also affects almost everyone to some greater or lesser extent, so the effect can become cumulative in that not only does the candidate lack proper context for the ritual, but those conducting it likely suffer from the same. Only a return to valuing the sacred, the sublime, the divine can remedy this. That means a reorientation of what we pay attention to, to what we love. Because we pay attention to what we love. And the divine is the most jealous lover there is. So, cultivating our lives around the teachings, around our relationships, and around honoring that which makes our lives possible is the single greatest factor in determining whether esotericism is functional. I don’t think I can be any clearer than that.

Finally, we must understand that there are at least three aspects to the initiation. First, there is the rite that transmits the seed of transformation. Second, the initiate must cultivate this seed and allow it to grow within themselves through the methods that the initiation process empowers them to practice. This is the actual work involved in the Great Work and it is understandable that this is usually an almost insurmountable obstacle. Last, there is the final product of the initiation—the realization of the truths conveyed during the rite. While modern fraternities, societies, and orders may always try to do the first, it is a minority of members that seem to actually practice the methods, and because there was no realization initially transmitted, even the possibility of actual realization through practice becomes a faint hope at best. With this in mind, we can begin to understand why modern esotericism so rarely produces the results that the sages lead us to expect—gnosis.

It is for these reasons that modern initiations don’t currently compare with the initiations from ages past. However, it is important to understand that it is still possible in our time to gather all of these elements together (place, myth, names of power, realized initiator and teacher, the proper attitude of the candidate, and the three aspects of initiation, practice, and realization) to produce substantial results and the potential to transform those who are seeking a direct connection with the divine. But if these ingredients continue to be overlooked, ignored, or discarded, there is no hope of restoring the efficacy to initiatory rites that should be present. Because I have seen and experienced initiations from both sides (initiation and counter-initiation), I know the differences to be real. But I also know that without the candidate valuing the divine, the possibility of greater connection, and being willing to work and give everything for it, initiation cannot succeed. It is my desire that initiation rites be what they were originally intended, and the seeds of transformation are spread so more may know truth.

The Art and Science of Initiation

This is one of the most insightful perspective on initiation Ive seen expressed in quite some time. Thank you, brother.