Something Interesting on the Horizon - By Robert Lomas 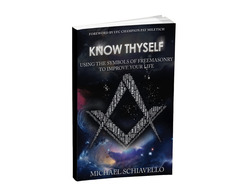 One advantage of writing for Lewis Masonic is that when they commission a new book that they think I might find interesting they sometimes send me a pre-release review copy. Last week they did exactly that with a new book about symbolism they plan to release later this year. The author’s name was new to me but the title intrigued at once. It was “Know Thyself”.

Two things attracted me about the title. Firstly, the concept of knowing yourself had an instant allure, it is a key teaching of Bro Walter Wilmshurst who founded the Lodge of Living Stones. Wilmshurst has long proclaimed the view that Freemasonry is a spiritual self-help system which helps you understand yourself and so make contact with the divine spark of consciousness that makes you human.  The second feature was the use of the second person singular form of Thy. For some time now I have been working on an English translation of a Victorian Welsh novel Rhys Lewis, by Daniel Owen. The use of Thee, Thou and Thy declined in English during the nineteenth century but it is still a form used in Welsh and implies close intimacy with either a human or with the Deity. (You see this in the King James Bible.)  Having been struggling to capture the nuances of this second person pronoun when translating Victorian Welsh in modern English, I am acutely aware of its significance.  Thyself implies an intimate understanding of the Divine Spark at your own centre, the spark which makes you human and connects you with the Grand Plan of the Great Architect.  It is an inspired title which works on many levels of symbolism. It is fresh and yet traditional, simple yet complex and carries in two words the most fundamental secret of Craft Masonry.

The book, which discusses how to use the symbols of Freemasonry to improve your life, is written by Bro Michael Schiavello. Michael is a graduate of the Masonic Education Scheme of the Grand Lodge of Victoria, Australia as well as an experienced and successful sports commentator. Many years ago I contributed to the discussions which culminated in the education scheme he studied and also donated a module on Masonic history. Masonic education is valuable in many ways but most importantly it encourages individuals to think about themselves and the Craft they have joined. Michael has taken the practices of Freemasonry and set them within a world-wide tradition of symbolism and philosophy. But this is no dry and dusty academic tome. Bro Michael regularly commentates on live sports events. He is a skilled communicator and expresses himself clearly. And he doesn’t pull his punches. The book opens with a question. What is the meaning of life? That question goes right to the heart of the peculiar system of morality which is veiled in allegory and illuminated by symbols. It is the question which drives all great religions and philosophical systems of the world. And it is the raison d'être of Freemasonic Initiation.

The book sets Freemasonry’s teaching in context of humanities’ attempts to answer the great question. Michael understands the versatility of teaching via allegory and symbolism. It can speak in many different ways and to different levels of understanding. By encouraging his brethren to think about what a symbol means to them and how they interpret a ritual allegory he helps them develop themselves. If thou art interested in learning about thyself this book will guide thee without forcing thee to accept any pre-set ideas. It will help thee reach deep within thyself to find the secret at thine own centre.