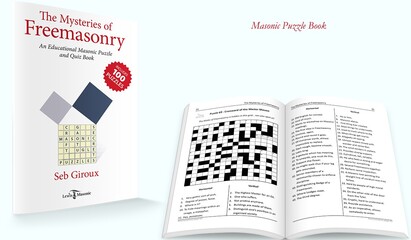 Freemasonry is fascinating, isn’t it? The lure of all the mysteries, the progressive ideas it has inspired in countries like the United States, the symbols that are supposed to hide in plain sight and this special bond between brothers that they are forbidden to share outside, all of this played widely in my imagination long before I could finally join.

At my initiation, I was so eager to learn a few things, to get to grip with what really takes place behind these closed doors. The jokes in my Lodge didn’t help either. Some of the brothers talked about a skull, some blood, being rather undressed or blindfolded, having to fall backwards and trusting someone would catch me, having to give away all my money, even my soul.

Of course, the ceremony went very well. I was in awe of all the hard work that went into it. Then came the ancient charge that invited me in its inimitable and wordy style to make a daily advancement in Masonic knowledge. We’ve all heard it. But really, what does that mean, and how are we supposed to comply? Well, the simple truth is that everybody can interpret this in their own way.

My thirst for a better understanding of Freemasonry increased tenfold after joining as I discovered the complex ramification of the Order and its history. Learning about it can be incredibly daunting and may appear much too laborious for many. Literature and research abound, but most of the texts require a rather academic mind. And that got me thinking: could there be a way to explore and share all that knowledge in a manner that playfully mixes entertainment and learning? Could brothers make their daily advancements without this awkward feeling that they are back on a school bench?

The answer came to me in what is called gamification. This means employing elements customarily found in games. I immediately knew that Freemasonry would be a great place to explore this concept. The first game I created was the Third Degree crossword. I wanted to place a graphic element into it as well as a specific theme. Then came the idea of a quest. So many numbers have a symbolic meaning; it was very easy to create a trail through numbered questions.

So many games exist that can be used and transformed that it is almost limitless. I have to admit I probably have more fun creating the puzzles than I would have resolving them. The trickiest one of all has been an adaptation of the family classic Cluedo or Clue. It took me some time to figure a way to make it feasible for a single player and still retain the logical challenge of the original.

Next came the choice of topic. I wanted it to be entertaining and educational but also to debunk some of the common myths about Freemasonry. You know, the stuff we keep seeing in movies and novels such as the seal of the United States, the logo for Gmail, Freemasons on the Moon, the layout of Washington D.C and of course the Templar connection. A lot of these are quite enjoyable to play with. What is true, what is pure invention, who to trust? I have tried to address a few of these urban legends, but I am pretty positive that doubts will subsist… Some tales will never die. They are forever part of the Freemasonry fabric.

As I was compiling the final draft, I had to eliminate a few puzzles. Some because they didn’t work, others because there was simply not enough space to fit them all. Since then, I have kept creating new games and questions. With all this material now available, there may be future editions of the puzzle book. Keep an eye out!

Until then, I wish you a very pleasant time wrapping your mind around these 100 puzzles