The Dog Ate Our History 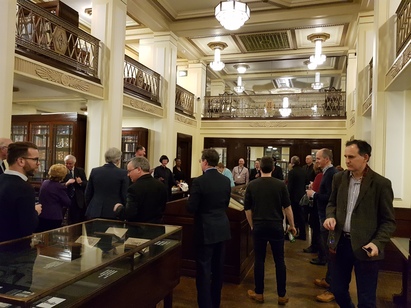 On the evening of the 8th February the Library Museum of Freemasonry in London opened its doors to present its latest exhibition - Decoded: Freemasonry’s Illustrated Rulebooks. As General Manager of Lewis Masonic I was amongst the guests invited to the preview night.

Having recently celebrated the tercentenary of the creation of the United Grand Lodge of England, this exhibition is a chance to view Freemasonry as it developed after 1717. The display has been produced under the expert guidance of curator Martin Cherry and offers a unique chance to investigate and gain insight into this transformative phase in the history of the Craft. The exhibition is set during a fascinating and volatile time in Freemasonry’s history, when strongly competing ideas over which qualities an ideal Mason should possess caused Freemasonry to both flourish and almost destroy itself. As such this exhibition is of interest both to the philosophical Mason and the lodge historian alike.

At this time books were sold unbound without covers, which made the frontispiece (the illustration facing a book’s title page) particularly important. It is also why so many authors gave their books expansive titles, in many ways they were a combination of the title and blurb found on modern books. It was during the Renaissance when printers began to preface works with figures and visual ‘devices’, giving the book a pictorial and artistic summary also. So when it came to the ‘Constitutions’ both Grand Lodges jumped on the frontispiece as a means to promote their propaganda and further their cause.

If you are familiar with Tracing Boards there are many themes and symbols you will immediately recognise. Three masons wearing tricorn hats stand holding the working tools of the square, compasses and plumb rule before a backdrop of Corinthian, Doric and Ionic columns each of which hold the Sun, Moon the Seven Stars. Some of the elements in these  however may surprise a modern reader. For example Freemasonry is often depicted as an elegant lady sending forth divine blessing. In one case we even see her reclining regaly like Britannia beside the river Thames.  But there is more ... Helios riding through the sky on his chariot, truth sits on a cloud holding mirror, divine light shining on air pumps and scientific equipment, these beautiful illustrations have a lot to offer to those who truly take time to examine them.

Sometimes however simplicity can be key. During your visit look out for constitutions of the ancients named Ahiman Rezon. Its frontiers piece consists of two the Coat of Arms. The one on the top being that  of the Ancients Grand Lodge itself (which the Grand Secretary Laurence Dermott had been found among the papers of the 17th century Jewish scholar and antiquary, Rabbi Jacob Jehudah Leon) below this we see the Coat of Arms of the London Company of Masons. Thus the statement is made that the Ancients Grand Lodge evolved from and was build upon operative masonry.

The Antients’ Constitutions doesn’t include a traditional history in the way the Moderns do, rather it contains a highly symbolic, but also idiosyncratic, explanation as to why not. The author outlines to the reader that he did indeed write a history but rather unfortunately the neighbour’s dog ate this first draft and, before he could complete another version, he had a dream, during which a high priest appeared to tell him that a history was unnecessary to his work. Could this be the first recorded case of a dog eating someone’s ‘homework’?!