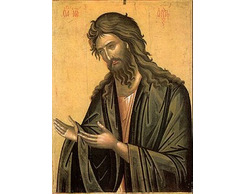 Anyone who reads the early records of Masonry will notice that Freemasonry
is often referred to as "St Johns Masonry". The first Grand Lodge was formed in 1717 on
24th June, the feast day of John the Baptist. But why was John the
Baptist chosen as the patron of the Masonic craft? Surely Solomon, St.
Vincent, or one of the many other saints who have an association with
builders or craftsmen would be more appropriate?

Well, look into this matter and you will soon find many
explanations - both historical and symbolic.

Having considered this matter for some time, I have come to the opinion that
the reason is as follows. John the Baptist lived his life with a focus on
self-purification and preparation for the coming of higher teachings.

Could it be that Craft Freemasonry was dedicated to him because the core aim
of the Craft was, and always has been, the transformation of vice into virtue?
The truth could be that to the early Masons those who followed the teachings
offered by Freemasonry were like John in that they were purifying and
improving themselves. Perhaps this could be a hint that even then there were
higher teachings that were yet to come.

If so, what do you think the next step would have been in those early times?

The Order of Christ feast day is also June 24th. It is the day they switched their name from Templar to Order of Christ at Castro Marim, Portugal. The municipality still celebrates this day as their municipal holiday. The architectural motifs all have Masonic equivalence. According to their statuts they had Masons as Brethren who along with chaplains were allowed to wear leather gloves. Also they have the longest treaty of alliance with England. Just historical coincidence. Also in 1383 John 1st was elected king (1383-1433). He married Philippa, daughter of John of Gaunt, in England commencing the close relationship with England. He was the first foreign monarch to receive the Order of the Garter. A St. George Chapel was added to the Order of Christ headquarters at Tomar for Garter Knight to fulfill their duty. Manueline architecture includes Garter in their motif, because of it. He was the Protector of the Order of Christ and Grand Master of the Order of Avis. Also part of their habit not only did they wear leather gloves, but also a scapular (apron) with the red octogonal cross on the breast. Also the gloves upon the columns are part of their architectural motifs as well as the cord around the architrave.

Our affiliation concerning 'St John' has to do with the relationship between the 'personality' and Benjaminite Princess Mary (of Bethany) Magdalene. Particularly the 'Gospels of St John'. This is of extreme importance to Templars. Mary's 'number' is 22, her 'colour' is orange.