Freemasonry in London from 1785

by Roy A. Wells 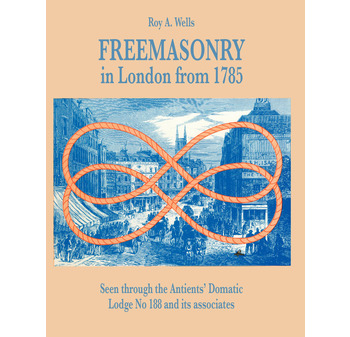 This book is a well-researched study by a competent masonic scholar who has welded links from the changing scenes that arose in an era in which the most important step forward in organised Freemasonry was taken, the masonic Union between the two Grand Lodges in 1813, and from the events that followed.

As a vehicle for his survey the author chose an Antients lodge which was formed by Dispensation in December 1785 at The Ship Tavern, situated at the junction of Gate Street and Little Turnstile, off Lincolns Inn Fields. It was constituted in February 1786 by Laurence Dermott, probably the most outstanding character in the history of Freemasonry in determining the course to be steered, who fancied those brethren Warrant No 234.

That lodge on that night took the name Domatic, and on the subsequent renumberings and closing-up of the Registers now take their place as No 177 on the Register of United Grand Lodge of England. Whilst the records of the Domatic Lodge. their Lodge of Instruction (AD 1808), their Royal Arch Chapter (AD 1793), and Chapter of Instruction (AD 1850) provide terms of reference and an ordered sequence the book is not intended to be taken as a history of that group.

Personalities arise throughout the account and it is from the examination of their behaviour and activity that the reader will be enabled to appreciate the modus Operandi and the emergence of things masonic, also to understand the difficulties of that age.

The human element bursts into various scenes and events and it is the authors treatment that converts the factual into the fascinating and makes for such absorbing reading. He takes notes of the various qualities and failings that one would expect to find in any large organisation, but, as he has stated, this time they have been clothed with a Masonic apron!

Although it is a progressive account of the development of Freemasonry with such interesting aspects it is also a book of reference and a guide to further information if a study of a particular facet of Freemasonry is desired, and for that reason it  will undoubtedly take its place among the important masonic publications.