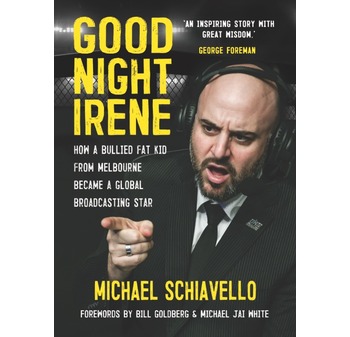 Good Night Irene is the entertaining and powerful story of a regular kid from Melbourne who became an award-winning television sports broadcaster, with his unique brand of commentary regularly beamed to millions worldwide. The overweight son of an immigrant factory worker, Michael Schiavello was bullied at school because of his weight and told hed amount to nothing in the media industry. By his late teens he knew he had two things going for him: his booming voice and a burning determination to prove his critics wrong. Michael details his incredible rise from university drop-out to topping TV ratings in the USA and Asia, and a behind-the-scenes look at celebrities he encountered along the way, including: a gun-toting Steven Seagal, Drake, Jean-Claude Van Damme, Diego Maradona, Cathy Freeman, Hulk Hogan, Dannii Minogue, Sugar Ray Leonard, Dana White, Jackie Chan, Wasim Akram, Stone Cold Steve Austin, and many more. Warmly humorous and filled with heart, Good Night Irene is testament to the power of passion and perseverance for anyone battling to find their place in the world.

More than a memoir this book will impact and inspire you. Michael Jai White, American actor, director and martial artist

No one I know within the broadcasting world has earned the moniker of The Voice more than my friend Michael Schiavello. You will love the story of his incredible journey. -Jim Ross, WWE Hall of Fame Commentator

Passion, humour and hard work comes through in this inspiring read from someone whos made an amazing career for themselves. The book is full of fascinating insights and great stories. All the attributes I saw in a young kid doing work experience are on display in the man, plus I get to tell people I know him! - Richard Stubbs, Australian broadcaster and comedian

When I first met Michael as a dumpy, over-enthusiastic teenager (him, not me), I told him, Kid, if you love what you do and work hard enough, you can achieve anything in life. Of course, I didnt mean it. Now, 30 years on, Im so glad he took my disingenuous words to heart because that is exactly how Michael became one of the great international voices. Love and hard work will get you everywhere. -Santo Cilauro, actor, comedian and producer (The Castle, The D-Gen, Frontline, Utopia)

A truly inspiring testament to devotion and unwavering self belief. - Miesha Tate, Former UFC Champion and One Championship Vice President

Youre about to read some inspiring stories. I hope you find proof in them that through hard work, sacrifice, discipline and dedication, you too can achieve whatever your mind conceives, and your heart and soul believes in. - Bill Goldberg, WWE Superstar, TV host, actor (The Longest Yard, The Goldbergs, NCIS: Los Angeles)