The Key To Modern Freemasonry, The Hidden Mysteries Of Nature And Science 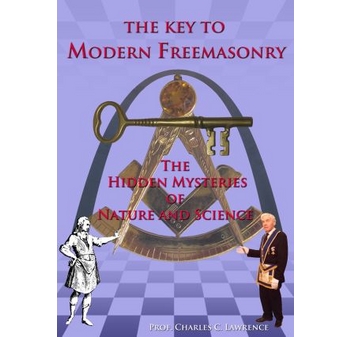 Why are Freemasonrys rituals laced with scientific concepts and the imperative for learning? Why such a reliance on allegory? Why is the outmoded science enshrined in Ritual so crucial? How did such a dubious group of founders create a brotherhood based on the strictest principles of humanitarian behaviour and why did the intrinsic beauty of the concept far outweigh their shortcomings?

Once in every generation comes a lateral thinker who brings radically new perspectives to old questions. Professor Charles Lawrence has been a scholar of Freemasonry for over forty years, but he is also an internationally recognised scientist and engineer. These parallel disciplines have influenced his approach to Masonic historiography, demanding profound analysis and the same detached stringency he applies to his scientific work.

Those with preconceptions about Masonry may find this an uncomfortable read. Questions are raised to which the answers are not always easy or palatable. Yet for those seeking the true Key to Modern Freemasonry, this book provides a solid base from which to begin the quest.

With a dedication to the Most Hon., the Marquess of Northampton, DL and a foreword by W. Bro. John M. Hamill, BA, ALA, PGSwdBr.

This book will allow you to:

The Key to Modern Freemasonry: The Hidden Mysteries of
Nature and Science by Charles C. Lawrence, Hamilton House
Publishing ISABN: 978-0955039265.

A simple search of Amazon.com or any reputable bookseller will yield a
plethora of books concerning Freemasonry. The list is sharply shortened
when the descriptor of science is added to the search. A discriminating
reader would then take the list of books and search for those written by
someone with some authority in the field of science. One work to come
out of this field would clearly be The Key to Modern Freemasonry by
Professor and Brother Charles C. Lawrence. Brother Lawrence is
Emeritus Professor of Engineering at the University of East London. As a
trained scientist, Brother Lawrence examines the history, rituals, and
development of Freemasonry from a very different point of view than the
common Masonic writer, who generally approaches such topics from the
view of the social sciences or humanities.
The result of Brother Lawrence's analyses is very interesting and
intriguing and revolves greatly around the English ritual of the Royal
Arch. The average American Mason needs to keep this in mind when
venturing into reading the work There is a considerable difference in the
English ritual and the ritual primarily practiced in the United States. A
second warning to readers from the colonial continent is to be prepared
to do some additional research into English history and geography. The
discourse on political figures and royalty can be a little overwhelming to
one not familiar with English history and development.
In all, the book has wonderful things to offer to any Mason who
wishes to grow in knowledge. The chapters concerning architecture,
geometry, and the four elements are worth the expense of the book by
themselves. Brother Lawrence gives a fabulous explanation of how the
early founders of the ritual crafted it together with a combination of
scientific thought and the revolutionary ideas that were developing in the
eighteenth century. Brother Lawrence does a wonderful job of examining
Masonry from a point of view that is rarely taken, and he is a true
authority in the realms of science as well as Freemasonry. This book is
neither an easy nor a quick read, but it is a work that any Mason with an
interest in science and the development of the Craft, particularly the Royal Arch, should read.

Bro. Charles Lawrence, Emeritus Professor of Engineering at the University of East
London, brings a unique approach to Masonic research: the scientific method. His
particular interest is in discovering who was responsible for inserting scientific
concepts (some outmoded today) into Masonic ritual. He approaches the problem with
the cold logic of Francis Bacon and the dogged determination of a bulldog. Following
his reasoning is like watching a murder mystery as the detectives determine who had
means, motive, and opportunity.
In the course of his investigation Bro. Charles looks into the mathematics of the dome
of St. Paul's Cathedral in London, the changing understanding of the nature of light,
the noble families connected with Freemasonry, and the founding fathers of the
fraternity. He casts a figurative net around each suspect, and the overlapping nets
become circles in a Venn diagram to narrow down the suspects.
I'm not sure which I enjoyed most: the side trips into 18th-century science, the
biographies of the possible authors of the inserted scientific passages, or the overview
of English history interwoven with that of Freemasonry. The book assumes its readers
are familiar with the English Royal Arch, which is a bit different from what we use in
the US. I thought that Bro. Lawrence assumed too early a date for the appearance of
some of the Royal Arch lectures without sufficient evidence, but his scientific approach
to narrowing down suspects is a marvel to behold.