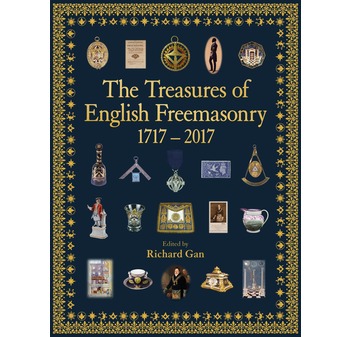 The Tercentenary of the establishment of the first Grand Lodge, and with it the formal organisation of Freemasonry in England and indeed the world, is celebrated in this easy-to-read and superbly illustrated volume.

In 1717  four London lodges came together to form the first Grand Lodge. Since then many millions of men have become Freemasons and in England alone over 9,500 lodges have been constituted. Whilst some of these lodges have come and gone, others have survived as long as Grand Lodge itself.

A true collector's item, The Treasures of English Freemasonry 1717-2017 is a beautiful and unique publication produced in conjunction with the Library and Museum of Freemasonry. It features over 200 items which mark interesting and important aspects of the rich history of Freemasonry.

Many priceless and unique treasures are featured, providing a record of English Freemasonry over the past 300 years. Each one has been carefully selected, professionally photographed, and grouped together into one of ten different themes, each with an introduction written by an acknowledged Masonic scholar.

This volume offers the reader a chance to explore the timeline of English Freemasonry. Each treasure is pictured in glorious detail, alongside a skilful explanation of its historical context and relevance to the Fraternity as a whole.

Themes and contributors include:

Richard Gan is a senior Freemason and a Grand Officer in all the major Orders of Freemasonry. He retired in June 2010 as Deputy Grand Secretary of the Grand Lodge of Mark Master Masons.

Born in 1950, he was educated at the Becket School, Nottingham, and is a graduate of London University, where he took an Honours Degree in Geology and subsequently studied part-time for a Masters Degree in Education. He is also a graduate of the Open University, where he took a Bachelor of Arts Degree in Management Studies. Whilst at the Institute of Education he combined winning a double distinction in the Postgraduate Certificate of Education with serving as President of the Students' Union.

He has enjoyed a number of successful careers during his working life - as a teacher and head of faculty; a local government chief officer in educational administration; Bursar and Clerk to the governing body at a grant-maintained school; Assistant Grand Secretary and subsequently Deputy Grand Secretary of the Grand Lodge of Mark Master Masons based in St James's; and finally Editor of The Square, an independent magazine for Freemasons. He is a full member of Quatuor Coronati Lodge No. 2076, the premier Lodge of Masonic research. Having fully retired in 2014, he now has more time to develop his writing and research into Victorian Freemasonry and the Orders beyond the Craft.

He lives near Lincoln with his wife Niki, who is a former preparatory school headmistress.

Initiated in 1980 and currently a full member of Quatuor Coronati Lodge No. 2076 (QC), John is also a member of other Orders in other places. His early research interests majored on the post-1947 decline of Masonic membership across the English-speaking world. More recent themes have included Revolutionary Fraternalism linking London to the Italian Risorgimento, and The English Masonic Union of 1813: A Tale Antient & Modern. Educated as a microbiologist, he is by profession a marketer and exporter working for a major multinational pharmaceutical company. In retirement, John is, by inclination, a Masonic searcher-out of curiosities and of mislaid history.

Paul Calderwood graduated in history from the University of Leicester. Subsequently, he was awarded a PhD by Goldsmiths College, University of London. His thesis has been published as a book, Freemasonry and the Press: A National Newspaper Study of England and Wales, which was the basis of the 2013 Prestonian Lecture. Articles by him have appeared in various publications including the Journal for Research into Freemasonry and Fraternalism. He was awarded the Norman B. Spencer Prize for his essay on 'Freemasonry and Architecture in twentieth century Britain' by QC in 2010 and he became a full member of the Lodge in 2014.

Dr James Campbell is Director of Studies in Architecture and the Seear Fellow in Architecture and Art History at Queens' College, Cambridge. He trained as an architect, practising in the US, Hong Kong and London before returning to do a PhD at Cambridge in architectural history. A Fellow of the Society of Antiquaries, he has published widely. As well as an interest in Freemasonry, his specialist fields are seventeenth century architecture, the history of building construction, and the development of library design. A successful writer, his books have been translated into eleven languages. He is a full member of QC and was Prestonian Lecturer in 2011.

Diane Clements is a graduate in Modern History from the University of Oxford. Subsequently she worked as an investment banker - most of her banking career was spent at Barings, the oldest merchant bank in London until its spectacular and appropriately historic collapse in 1995.

Diane has been Director of the Library and Museum of Freemasonry at Freemasons' Hall in Great Queen Street since 1999. Working with a team of dedicated professional curators, librarians and archivists, she has supervised its recent development with particular focus on making the collections more accessible on site and online.

David Harrison gained his PhD from the University of Liverpool in 2008, with a thesis that focused on the development of English Freemasonry. The thesis was subsequently published in 2009 as a book, The Genesis of Freemasonry. A follow-up work entitled The Transformation of Freemasonry was published the following year, with both works receiving critical acclaim. David has subsequently continued to publish work on the history of English Freemasonry, most notably The Liverpool Masonic Rebellion and the Wigan Grand Lodge in 2012 and The York Grand Lodge, which was published in 2015. Harrison regularly appears on TV and radio discussing his work, and frequently contributes to Masonic magazines such as The Square, Freemasonry Today and Philalethes.

Educated at Glasgow and Oxford Universities, Aubrey taught history at the University of Leicester, where he is Professor Emeritus of History.  His interests have been mainly in eighteenth century history, in particular with the links between London and the Provinces.  He was initiated into Masonry in 1967 and was Master of his Lodge before joining the Leicester Lodge of Research No. 2049 and QC, also becoming Master of both. The Prestonian Lecturer in 2003, he is also Past President of the Jewish Historical Society of England.

Born on the Wirral in 1937, Hugh was educated at Wimbledon High School for Girls - it was wartime - and St John's, Leatherhead. He trained in electronic engineering and communications, leading to electronic process control, wind turbines, and nascent business computer technology.  From the mid-1980s Hugh had his own IT consultancy business, providing services for small and medium-sized enterprises. Hugh was initiated into Freemasonry  in Derby in 1959 and having retired in 2002, he has immersed himself in Masonic research and became a full member of QC in 2012.

John Reuther was raised and educated in Islington, North London, before qualifying as a Biomedical Scientist at the Royal London Hospital. Subsequently he gained a Master's degree in Medical Microbiology at the University of Surrey and a Doctorate in the Faculty of Medicine at St Thomas' Hospital. Most of his working career has been in medical microbiology within the Public Health Laboratory Service. Initiated into Freemasonry in 1973 in the Province of Essex, John became a Trustee of the Royal Masonic Benevolent Institution in 2006 and was appointed Deputy President in 2013. He was elected a full member of QC in 2016.