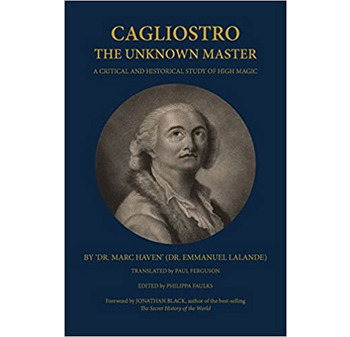 First published in French in 1912, this detailed and extensively referenced biography of one of history's most enigmatic figures has the advantage of having been written by one of the early twentieth century's leading esotericists, Dr. Marc Haven (real name Dr. Emmanuel Lalande). Born in Lorraine in 1868, and trained as a medical doctor at the University of Paris, Haven (a close associate of the legendary Papus) brought all his scientific training and esoteric knowledge to bear on the mass of source material - often confused, sometimes contradictory, sometimes scurrilous, almost always hostile - which had accumulated around a man who, at various times and places, was described as a thief, an impostor, a philanderer and a charlatan. The Cagliostro that emerges from these pages - deeply moral, courageous, witty, lovable, a healer of unparalleled talent, a skillful alchemist, an early champion of women's rights, a reformer of Freemasonry and, above all, a true Christian - is far removed from the absurd diamond-encrusted charlatan of fiction and film. Haven's meticulous analysis of the writings of those who knew the man on a day-to-day basis and his willingness to let him speak for himself in his own noble and powerful words, restore him to his rightful place as one of the truly great figures of Western esotericism as well as a man who, had he succeeded in two of his major projects - preventing the French Revolution and persuading the Roman Catholic church to embrace his Egyptian Rite - would have changed the course of history. By turns hilarious and deeply moving, Haven's book remains, despite its age, one of the most colourful and comprehensive sources of information about this enigmatic figure as well as one of the finest esoteric biographies ever written. Paul Ferguson's translation of Haven's revised and corrected text is enriched with a short biography of the author, prefaces by 'Secret History of the World' author Jonathan Black and leading occult writer and Cagliostro expert Philippa Faulks, and a list of English-language Internet sources. Anyone with an interest in 18th century social and cultural history will enjoy this book, as well as esotericists, Rosicrucians, Freemasons and anyone concerned to see one of history's most maligned figures portrayed in his true light.