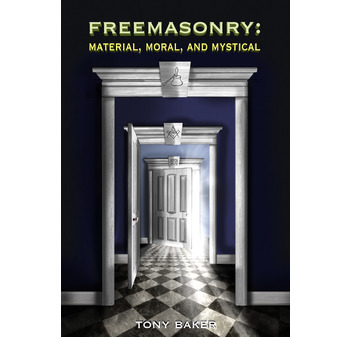 When you ask for an explanation of a passage of Masonic ritual, what is usually given is an outline of the Origin  of that particular practice why the operative stonemason used those secret passwords and signs to communicate his level of experience and expertise;because, after all, he had no Diplomas or N.V.Q.s to show to his prospective employers. This is comparable to explaining Christ's Parable of the Sower by talking about how impossible it is to ensure that all your seeds are sown on good fertile soil. But Christs intention was not about giving advice to arable farmers! He had a message for all humanity, and so does Freemasonry.

Occasionally, an elaboration of the Meaning of the Square, Level or Plumb-Rule as symbols, from the point of view of a basic morality, might be offered; or what working on a Rough Ashlar with the aim of turning it into a Perfect Ashlar means might be discussed. The rituals themselves, however, are fairly clear on this basic morality level of interpretation.

The ritual itself tells us that Freemasonry is veiled in allegory so we know that the surface meaning of the words and actions is not what we are intended to get out of the ceremonies. But what deeper meaning might we be intended to hear? It is very rare to be given an explanation of what Masonic rituals might Mean for us living in the 21st century  to hear an in-depth elaboration of what Freemasonry might be trying to teach us messages that might be of use to us in the modern world. This book explores three different levels of Meaning in the rituals and ceremonies of the Craft and Royal Arch. The author argues that the superficial layers of meaning are easy to see both for the Freemason and the outside world but there is a deeper layer intended for Freemasons alone.

At last! For so long there has been an ongoing cyclical debate within Freemasonry as to the true nature of the Order. Is the Order here to bring about practical and charitable help to the world? Is the goal of the Craft to cultivate virtue, or does Freemasonry have a deeper hidden purpose that should be focused on? Anyone who reads of the philosophical schools that were of great influence during the development of Speculative Freemasonry, will be aware how these teachings all have their own ways of overcoming such pigeon-holing and false dichotomy by encouraging a unified vision of things. As above so below say the Hermeticists; Nowhere in nature exists a vacuum, declare the Rosicrucians: all things are real, write the Eleatics. Masonry, material moral and mystical is one; this is the message of this book. Read it, its what we need to share.

The Square Magazine  by Pat Streams

Probing perspectives Exploring deeper messages and meaning One of the great delights about Freemasonry is that it does what it does on so many levels, often all at the same time, but equally often unfolding its thought-provoking aspects at different times as one progresses. On a simple level, it knits together charity, companionship, tolerance for others, history and spirituality in a subtle blend that only makes real sense through what we actually do in the lodge room. If it didnt do this well, it would not have survived for three centuries. The author of this well-written and thoughtful book Tony Baker, puts the blend as follows: fellowship, morality, charity and something deeper. He focuses squarely on the latter: in other words, what happens in lodge and Royal Arch chapter rooms and its implications as it affects us as individuals. He is, however, careful not to lose sight of the importance of the historical, social, charitable and moral aspects of Freemasonry, instead arguing that it is the more profound meaning and deeper messages of our ceremonies that underpin them. Baker suggests that true Freemasons are seekers who feel a sense of something missing, who have come to realise that they are not complete and so are therefore on a quest. Interestingly, he adds that perhaps the reason the United Grand Lodge of England does not tell its members what the ceremonies mean is that those deeper meanings are for individual Freemasons to find out for themselves. Many of us sense this in some way, however dimly. Bakers clear, yet thought-provoking book may be just the thing to help bring that into sharper focus. I enjoyed it and would recommend it.

Antony Richard Baker, M.D. came to the Craft somewhat late, inspired by the Masonic funeral of his father. He quickly joined a variety of lodges, bodies, and rites, occupying the chair in several, including the Lodge of Living Stones No. 4957, Yorkshire, and Quatuor Coronati Lodge No. 2076. This book collates decades of his lectures, programs and research papers. Tony Baker understands Masonry well, as this brief volume demonstrates. More importantly, he wants his readers to experience his insights into the deep spiritual teachings hidden in the Ritual, lectures, and experience of Masonry. Thereby he gives meaning to the English Emulation Rituals description of Freemasonry as a peculiar system of morality veiled in allegory and illustrated by symbols. Freemasonry: Material, Moral, and Mystical offers a road map to Masonic illumination. Brother Baker avoids unsupported conjecture about unspecified and unexplained ancient mysteries and Hermetic secrets. Rather, he plainly explains them as well as the deep valuable insights they provide. This alone makes this relatively short work an essential building block in the pursuit of genuine Masonic education. He explicitly states his purpose in writing this book: The real Lodge referred to throughout Masonic rituals represents our own individual personalities, our selves, and if we understand this we will find that it reveals an entirely new level of meaning to our ceremonies. This concept is at the core of this book and its application may well change your whole appreciation of Masonry. Dr. Baker repeatedly advises his readers that Masonry is a journey in which each level of spiritual enrichment impels the traveler onward to the next. The journey points inwardly to the divine spark, not outwardly to the world The first level, the moral or intellectual, means the straightforward moral interpretation that is easy to see and indeed is often spelled out in the ceremonies. Nevertheless, Baker pulls no punches describing this level [W]e are supposed to have strict morals in order to become Masons in the first place, and our charitable inclinations are tested during the First Degree, so it should not be necessary for Freemasonry to spend its whole time and effort encouraging the morality and charity of its members. And indeed, for me at least, that is not the main thrust of Masonry at all. Commenting on the second Degree, Brother Baker asserts: Everything in Nature, including ourselves, has two sides, two aspects active and passive good and evil material and spiritual. Everything is subject to opposing forces; the trick is to balance these in equilibrium . Unfortunately, in most of us, these forces are not in balance. Dr. Baker warns his audience: But what the Bellman, in Lewis Carrolls The Hunting of the Snark, asserts: what I say three times is true, is itself not true. Just because we keep saying that there is a Divine Spark within each of us does not, by itself, make it real for us. Indeed, It is one thing merely to believe in God and another thing entirely to have direct knowledge of Him. [T]he mystic, however, has had a direct experience of His presence and of uniting with Him Having performed the Ritual, we must then go on to do the inner work it represents within ourselves. It does appear that Emulation Ritual includes an admonition in the Hiramic legend missing from regular American ritual. As Dr. Baker notes: Later in the Emulation Third Degree ceremony, our Grand Master told the first of the three ruffians that he had no doubt that patience and industry would, in due time, entitle the worthy Mason to a participation of them [the secrets of the Third Degree]. Ignoring that admonition deprives even the most superficially active Master Mason of the Crafts true gifts, the secrets within. No collection of pins, jewels, collars, and honors can confer those insights. Freemasonry: Material, Moral, and Mystical demonstrates that, once initiated, Brethren are already among the esoteric, the insiders, the learned. Yet the Master Mason just receives more light, not all the light, and must endeavour on his own to achieve the levels available in the Household of the Faithful. As a teacher, as an educator, as one whom loves his Brethren and roots for their success, Br. Tony Baker succeeds by sharing the secrets discovered through his own experience attaining a mystical level of Freemasonry.

Whenever a Qualified Mason offers his insights into the interpretation of the Craft, it is worthy of serious consideration. That is certainly the case with Tony Bakers Freemasonry: Material, Moral, and Mystical. This volume opens by rejecting the belief that there is no deep meaning in Masonry at all. Baker, a Past Master of Quatuor Coronati Lodge No - 2076, rejects this notion as incongruous with the plain language of the workings, and frames Freemasonry as the University of the Inner World. The book gets off to a rather slow start, as Baker argues carefully in favor of essentials that were once taken as given: that Masonry bears sophisticated meanings, that it relies upon symbols, and that it must be grounded on a belief in God. Over a third of the book is devoted to what might be termed apologetics on these matters; though Baker does it well, that these matters must be justified to Freemasons may indicate how far lodge culture has descended into materialism and sentimentality. When Baker lays out his model of Masonic interpretation, it is divided into material, moral, and mystical layers. The second half of the book is a series of chapters exploring the Craft degrees (which include, of course, the Holy Royal Arch) from the perspectives of the three levels in his model. In the first degree, Baker points out that the prayer at making implores God to grant a competency of Thy divine wisdom to the candidate, which would not be necessary if the lessons of the Craft were only about fellowship, basic morality, or charity. Some of the authors strongest arguments are derived from the tracing boards of the degrees. Of the first degree board, he says This is no picture of a building site; it is a symbolic illustration, meant for contemplation. Bakers interpretations draw from twentieth-century authors like Wilmshurst and MacNulty who considered the officers of the lodge to represent aspects of an individuals consciousness. He understands the Craft as an interior journeyfor him, the degrees chart the Basic Allegorical Masonic Journey to the Centre. Light reference is made to traditional systems of mysticism such as kabbalah, but overall the author tends to describe the contemplative journey in non-specific terms, which may help make the work more relatable to those who are new to the subject. While one feels it may have been stronger with more space devoted to symbolism and less to apologetics, Freemasonry: Material, Moral, and Mystical is a valuable addition to the interpretive literature of English Freemasonry. Reviewed by Shawn Eyer, FPS